I was fortunate to have met Liz Coley at the SCBWI annual New York City conference last year. We sat together during the marketing workshop and as we chatted, I felt an immediate connection to this talented writer. Liz was kind enough to include me in her blog tour and answer some of my questions. Thanks Liz! 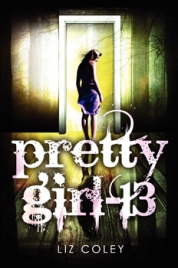 Liz Coley is the author of Pretty Girl-13, a young adult psychological thriller about a girl who must piece together the story of her kidnapping and her captivity. Her novel has been released in at least ten languages.

Pretty Girl-13 has some very scary scenes. How did you feel as you wrote these scenes? Were they as unnerving to write as they are to read? 🙂

I wrote the bulk of the first draft for Pretty Girl-13 in the thirty days of November 2009. I thought I was keeping a clinical distance from more intense scenes, but on the other hand, I felt edgy and out of sorts all month, so obviously they were getting through my shields. The parts I felt most emotional about in the process of writing were the sad or sweet scenes. 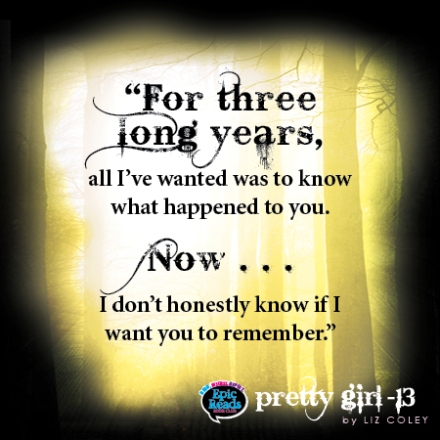 Pretty Girl-13 focuses on a girl with multiple personalities. What was your research process like as you gathered information about this disorder?

I did most of my research in the time leading up to writing so I could hit the ground running on November 1 for National Novel writing Month. I read a few books, a lot of scientific papers, and several websites about Dissociative Identity Disorder. I also tracked down as much as I could about the neuroscience I used in the story. With a background in molecular biochemistry, I was particularly fascinated by this aspect. It’s certainly an extrapolation from what we can do at this very moment, but not implausible in the near future.

Your self-published book, Out of Xibalba is a very different story from your most recent novel, Pretty Girl-13. Was your writing process different for each book?

Out of Xibalba was another Nanowrimo novel, so again, I did all the cultural research up front over the summer before I started writing. I read seven books on Mayan culture and one on indigenous botanical medicine. There was a lot more to work out on the fly, like the information relating the Mayan and Gregorian calendars (the story takes place before the Julian calendar), using Google maps to work out relationships between real locations, and consulting one of the archeologists from the actual excavations in Xunantunich. Whereas Pretty Girl-13 was a struggle to draft, Out of Xibalba poured out of me like it had been waiting to be born.

When you self-published Out of Xibalba, did you already have an agent? What were your reasons for self publishing? What was the self-publishing journey like?

I had an agent at the time I self-published OOX. She was still on submission with another pair of books (political adventure/thrillers for teen girls) and wanted to concentrate on those. OOX didn’t fit an obvious market niche, so she thought it would be a very tough sell. As the end of the world drew near, December 21, 2012, I knew the freshness sell-by date on my Mayan story was approaching and past. I decided to self-publish this child of my heart with my agent’s blessing. I’m glad I did, because it gave me a better appreciation for the entire book production and marketing process, as well as practice doing TV interviews, school visits, speaking appearances, and writing workshop presentations.

What is your writing process like? Do you outline first or do you just write the story as it comes to you?

I am pretty much a pantser, though I try to aim for a few milestones. If I know what the first big climax scene is going to be (end of Act I) and the next major crisis (Act II midpoint), I can get halfway through the book by plodding along at 600 words an hour. By the time I’m there, I usually know at least what the end of Act II climax is going to be. The trickiest part for me to plan ahead is the final climax point that makes everything even worse than I left it at the end of Act II and then pulls all the threads together.

Do you follow a specific writing schedule? Do you have a special place where you like to work?

My annual schedule is to draft like crazy in November, finish a first draft in December, and begin the cycles of revision with the goal of being submission ready before the next November. My daily schedule is to procrastinate all morning with grocery shopping, cooking, laundry, tennis, etc., then work in a guilty panic all afternoon.

How long were you writing before you considered yourself a “serious writer” aiming for publication?

Great question. I think I slid into it without realizing until quite late that I was into quicksand and stuck for the duration. When I co-wrote a romance novel for fun in 1984, I was only dabbling on the edge. With the same friend, I co-wrote and submitted a slew of short stories to children’s magazines, again on the dabbling level, although I eventually upped my game in 1994 by investing in a correspondence course (pre-internet) with The Institute for Children’s Literature. In 1997, I attended my first science fiction convention writing workshop and had two short stories critiqued. I believe it was at that moment I decided I wanted to be a serious writer, but at the same moment, pregnancy number three started (coincidence?) and I postponed the dream. Finally, in 2005, I stuck both feet in and went back to that conference (CONTEXT) with another short story and my first sci-fi novel written and on active submission with my novel manuscript; at that point I was seriously serious. When my sci-fi short stories began selling in 2010, I knew the commitment was finally paying off.

Do you work with a critique group, beta readers, or others who see your work before your agent does?

I have a few trusted first readers and a few trusted last readers, and I used to use the Online Writing Workshop for Science Fiction and Fantasy to gather chapter by chapter critiques. I invested a great deal of time in waiting for feedback and paying back on OWW (made some great friendships in the process). It would take 3-6 months to put a manuscript through. At this point, I prefer to work with people willing to read much longer chunks at a time. Also, if the work doesn’t follow people’s SFF genre expectations, OWW isn’t as useful. I’m evolving toward showing work at an earlier stage to my agent.

Can you tell us a little about your journey to publication? What was it like when you finally got the call from your agent that Pretty Girl 13 has been picked up by a major publisher?

After several years of trying to sell my teen political adventure thriller, we were abandoning that effort and putting all our eggs into the new basket of Pretty Girl-13. I had been editing PG-13  intermittently for over a year when my agent decided it was ready to go out. Because Fall isn’t a good time to go on submission, the manuscript then sat in limbo from August to January before going out. There was an early offer that my agent advised me to turn down as it didn’t represent what she believed was the potential for the book. So I bit my nails for another six months, distracting myself by preparing Out of Xibalba for publication. Literally the same week I self-published and was packing to move 120 miles and was in the middle of buying a new house, I got a “call me” message—in the car, halfway between Cincinnati and Columbus. When I got home, I returned my agent’s call and got the amazing news that we had a good offer on PG13. I was ecstatic and stressed out of my mind.

Do you have any advice for unpublished authors?

Put a post-it note on your computer that says “Never surrender.” Cultivate writer friends both ahead of you and behind you in the process. Find mentors and mentees. Networking and relationships are really important both for sanity and for learning about opportunities, strategies, and how this crazy adventure works. Keep writing and improving your craft. Invest in yourself and go to conferences. You meet the nicest people, like Loretta!

Thank you, Liz, for an amazing interview! I wish you all the best with your writing career. Next step, Pretty Girl-13 as a movie! 🙂

Lessons in Changing My World through Stories

Let me show you a world within this one.

Just a Guy with a Blog and a Mid-Life Crisis

Books, Reviews, Editorials, and Other Nonsense

Read on and I will show you another world within this one....

Smile! You’re at the best WordPress.com site ever

"May the odds be ever in your favor!"

My name is Russ. I like to write. Welcome to my blog.

The Writer's Code
Gardenias In Beirut by Amy E. Robertson

An expat's life in Lebanon